Innovate While You Integrate

The Latest in Supply Chain News, Trends, and Innovations from the DiCentral Blog

Tales From the Retail Apocalypse: Why Some Brands Fail While Others Flourish

Traditional retailers are at a crossroads, forced to adapt to evolving consumer expectations, rapid technological changes and steep price competition. Recent headlines feature a seemingly endless list of big name retailers like Sears, Charlotte Russe and Toys R Us announcing bankruptcy, with their suppliers left in limbo, unsure if they’ll be paid for their inventory. While some retailers are able to restructure and retain at least a partial foothold in the industry, others are shutting down entirely. What separates successful retailers and brands from those lost to the “retail apocalypse”?

An estimated 75,000 stores will disappear across the United States by 2026 due to the rise of e-commerce. Source

Amazon has become synonymous with e-commerce success, having taken online shopping to a new level. They’ve been relentless in anticipating consumer behaviors and expectations, with same-day and next-day shipping the new retail norm. Third-party product sales via the Amazon.com platform make up roughly 40% of the company’s sales, with sellers utilizing dropship as a means of cutting shipping times and increasing inventory. Amazon has also opened 80 pop-up stores (Amazon Go) in the United States, with plans to open more brick and mortar locations. While the e-commerce giant is winning the online shopping war, it still has to compete with brick and mortar rivals now offering free shipping, free pickup, and free returns, essentially leveraging their stores to pose a serious challenge.

The level of integration that Amazon possesses is a feat that few retailers can match, but serves as a powerful example that it’s not enough to offer a wide assortment of goods if your systems lack the level of sophistication necessary to support the fulfilment of those goods. Amazon’s large network or sellers and dropship suppliers must adhere to the platform’s strict requirements, with savvy sellers investing in modern order management systems as a means of ensuring a positive customer experience (and therefore, higher seller rankings on the platform). Further, the opening of brick and mortar locations signals that storefronts aren’t going to be wiped out in the retail apocalypse, but they must integrate seamlessly with all the other channels on which consumers are shopping.

The athletics apparel company Under Armour had humble beginnings, selling to just a handful of college football players in the late 1990s. In 1996 founder Kevin Plank netted just $17,000. However, by 2018 the fitness brand reported an annual revenue of $5.6 billion. The company supplied to several big-name retailers, such as Macy’s, Sports Authority, Dicks Sporting Goods and Kohls. However, in a familiar story, Sports Authority closed completely and Macy’s is closing 100 stores in an effort to restructure. Historically, manufacturers have been dependent on their retailers as the primary go-to-market model, and as a result, the challenges retailers have faced in this new era of retail have had a dramatic impact on the fate of manufacturers. This was the case when Sears went out of business, leaving many of its manufacturers unpaid for inventory provided, often teetering on the brink of bankruptcy themselves. Under Armour has avoided this fate in part because of the brand’s ability to act as its own retailer, with storefronts, outlets and an e-commerce website. Under Armour’s direct-to-consumer (DTC) revenue represents roughly 41 percent of their total revenue, making it unlikely that the failure of one of its distributors will have a dramatic effect on the future of the brand.

Under Armour is a prime example of the advantages of self-retailing, which lessens the manufacturer’s dependence on their retailers. Manufacturers able to successfully launch a direct-to-consumer business model in addition to supplying to or dropshipping for other retailers will not be quite as negatively impacted if those retailers fail.

Charlotte Russe began in the late 1970s as a junior’s apparel store in California, expanding to hundreds of storefronts by the late 2000s. They bucked the trend of the time by forgoing a website, focusing solely on their storefronts. Even after they created a website several years later, it did not offer online shopping. By 2018 the company operated 500 stores in malls around the country, when they began to suffer from a dramatic decrease in sales and struggled with the burden of maintaining a large brick-and-mortar presence. In early 2019 Charlotte Russe filed for Chapter 11 bankruptcy and announced plans to close all stores in North America. However, in March of 2019 the Charlotte Russe brand was purchased by a Canadian clothing manufacturer, who recently announced plans for a “brand new online shopping experience” and the reopening of 100 retail locations across the US.

In its many years in operation, Charlotte Russe failed to innovate in terms of the retail experience they were offering. Customers had no incentive to visit a store in-person and with no option to shop online, it was easier to buy from a competing brand. They ignored several obvious warning signs that their stores were in trouble, and their stagnant business model ultimately failed. Whether the new owners can salvage the name remains to be seen, but they will certainly need to adopt an omnichannel approach to their sales model if they want a fighting chance. This includes intuitive inventory and order management systems capable of automatically moving inventory when a customer adds an item to their virtual cart in anticipation of an order, as well as providing visibility from “Buy Now” to item delivery. Such systems will also help Charlotte Russe identify the closest location of a product to the customer who ordered it, (whether that be in a store or warehouse) ensuring the fastest possible delivery times, a retail must in the current market.

While many retailers struggle, others aren’t just surviving, but thriving. TJX stores (TJ Maxx, Marshalls, and Home Goods) are expanding rapidly, with plans to build more than 100 stores in the coming year. Not only has the discount chain leveraged a successful online marketplace, but they understand that the only other benefits customers value more than convenience is cost. TJX not only works with a network of more than 21,000 vendors to supply name-brand products, they also manufacture their own merchandise,which enables them to offer a huge assortment at discounted prices. While they do have an e-commerce site, their presence online supplements their company’s stores, driving traffic back to their brick and mortar locations. This is in part due to how fast inventory moves through the stores. TJX stores turn over their inventory every 55 days vs. the typical 85 days of similar stores, making it hard for a website to keep up with. Odds are good that an e-commerce addition is on the horizon, though it will likely differ from the store in terms of inventory and turnover.

TJX stores have not made the typical transformation from brick and mortar to omnichannel retailer, but has successfully navigated the retail apocalypse by understanding their customers. The stores under the TJ Maxx name offer a revolving door of brand names with deep discounts, which customers see as akin to a treasure hunt. The experience they provide is exactly what their customers want, with a slightly pared-down e-commerce site complementing their stores. TJX is secretive when it comes to how they manage to keep their supply chain running so smoothly, but there is no doubt that to achieve the same efficiency competing retailers will need a fully integrated supply chain. Disparate systems, such as electronic data interchange (EDI), warehouse and order management (WMS, OMS), and enterprise resource planning (ERP) simply cannot operate effectively unless they are fully integrated and able to communicate with one another.

The retail apocalypse isn’t the frightening end it’s been made out to be, but is rather a transformation, with retailers and manufacturers either adapting or being left behind. Successful names like Amazon, Under Armour and TJ Maxx are letting consumer expectations drive their supply chain, but the path to success varies greatly for each retailer and brand. It’s clear that e-commerce is not replacing traditional retail, as so many headlines warn. The two must unite, creating a seamless omnichannel with a rich in-store and online shopping experience. This is a time when innovation in ones offerings, processes and supply chain technology can guarantee not just survival, but growth.

DiCentral recently partnered with Lehigh University’s Center for Supply Chain Research for a groundbreaking study that examines the relationship between retailers and their manufacturers, as well as the implications of dropship and consumer expectations in modern retail. To get all the statistics and findings, download a copy now. 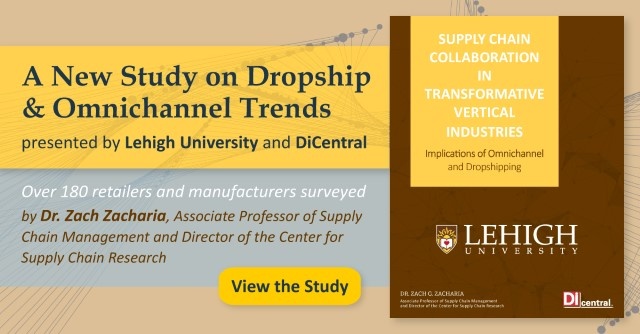 Founded in 2000, DiCentral is a leading global provider of EDI and supply chain solutions headquartered in Houston, Texas, with 11 offices worldwide supporting customers across multiple sectors in over 27 countries.

From small businesses to multi-national enterprises, DiCentral delivers the tools and expertise that enable a competitive edge that scales.

RESOURCES
CONNECT WITH US